“I should have led a more balanced life, but that’s easy to say at the end of things. When you’re caught up in what you’re doing, it’s very hard to be reasonable. And art isn’t really made out being reasonable.”

Clive James was diagnosed with leukemia and emphysema several years ago, but the poet, essayist, memoirist, novelist, TV host, and charter member of the Virtual Memories Show Dream List hasn’t let his ailments silence him. We got together at his home in Cambridge in February for a wide-ranging conversation about poetry, mortality, binge-watching Veronica Mars, writing Cultural Amnesia

(one of my favorite books), being Australian despite 50 years in the UK, the impact of his showbiz career — good and bad — on his literary legacy, and a lot more. We talk about his two new books — Poetry Notebook

(Liveright) and Sentenced To Life (Picador, UK only) — and the ones he’s working on, and how he faced two choices after his diagnoses: “Lie back on a couch, admire myself for my achievements, and sign off; or go on as if I had forever.” Give it a listen!

“All that poetry comes in handy when you lie there, contemplating the end. The question is why: Why when your body is about to come apart, is there such appeal in reading such highly organized argument and imagery?” 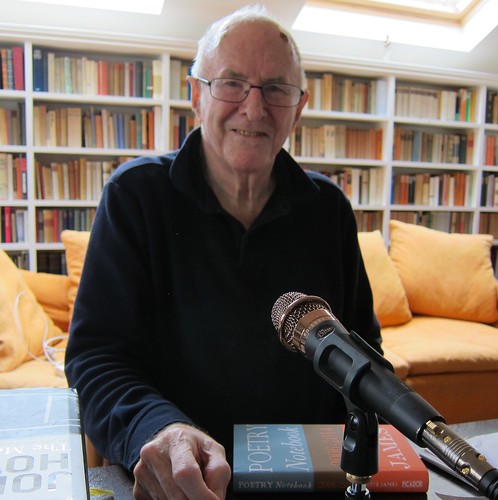 We get into the role that culture plays in civilization, the future of the Middle East, his first encounter with a Jew, the books he made a priority of when he realized his time was short, why it’s okay for actors to be shallow, and how he wrote a critique of Daniel Goldhagen while dressed as a mariachi singer for a TV show in Mexico.

“It’s possible to say that if I’d just concentrated on my literary activities [instead of working on TV], I’d have had a less complicated reputation. The question never would have arisen: Is he serious enough to write seriously?”

We talked a lot of books in this one. Here’s a list:

Born in Australia, Clive James lives in Cambridge, England. He is the author of Unreliable Memoirs

; the best-selling Cultural Amnesia: Necessary Memories from History and the Arts

; and the translator of The Divine Comedy

Credits: This episode’s music is El Cholulo by Tosca Tango Orchestra. The conversation was recorded at Mr. James’ home on a pair of Blue enCORE 200 microphones

. Processing was done in Audacity and Logic Pro. Photo of Mr. James by me.