“I was so excited to get an issue of Weirdo in the mail. I ran up my driveway and saw my neighbor and said, ‘Look! I got a letter from Robert Crumb!’ And he said, ‘Who’s that?’ And I thought, ‘Here’s my introduction to the mainstream appreciation of underground comics.'”

Mucho Cubismo! Mary Fleener joins the show to talk about her career in cartooning, her love/hate relationship with LA (mostly hate now, but there was a little love in the early days), the Zora Neale Hurston story that made a cartoonist out of her, the story of how Matt Groening accidentally derailed her career, her past-life regression while attending the King Tut exhibition in 1978, the roots of her Cubismo comics style, the joys of simplifying her life, the new book she’s working on, the horrors of The Comics Journal‘s message board, and more! Give it a listen!

“When I was going to college, you’d pass the guys selling ‘Muhammad Speaks,’ then you’d run into the Hare Krishnas, then there’d be the La Raza guys, then the Jesus freaks. Everything was in flux. Everybody was getting in cults. Everyone was either asking you for money or trying to convert you.” 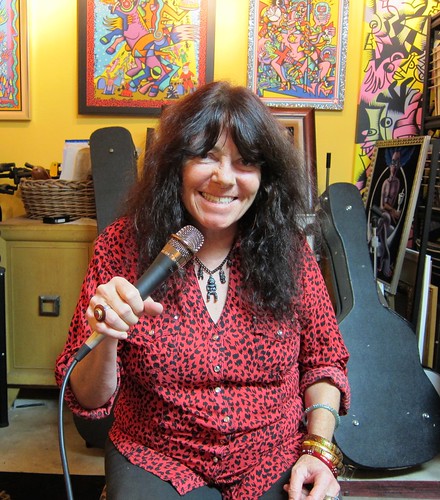 Mary Fleener was born in Los Angeles when smog was at an all time high, Hollywood was still glamorous, and every woman’s ambition was to own a mink coat. Inherited good art genes from her mother and never wanted to do anything else. A collection of her comics was published in 1994 by Fantagraphics as The Life of the Party. Her Illustration work has appeared in The SD Reader, OC Weekly, The Village Voice, SPIN, Guitar Player, Musician, and Entertainment Weekly, as well as projects like The Guitar Cookbook, Weird Tales of the Ramones (CD box set), STARTIME (the James Brown CD box set), Carlsbad Museum of Making Music – “Hands on the Future” exhibit, and CD covers for The Insect Surfers and Buddy Blue. Her paintings have been exhibited at La Luz de Jesus Gallery, Track 16, David Zapt Gallery, Laguna Beach Art Museum Annex, LACE (Los Angeles), COCA (Seattle), Southwestern College, Patricia Correia Gallery, Sushi Gallery and Ducky Waddle’s Emporium. She also enjoys making hand-built ceramics and wheel thrown functional pieces that she glazes and fires in her own kiln. She enjoys painting on velvet, that which we all consider the King of Kitsch, but which also makes her color and “cubismo” style of drawing even more dramatic and mysterious on the plush background of black velvet. She lives is in Encinitas, CA, with her husband, a dog, a cat, and lots of stringed instruments. They have a band called The Wigbillies.

Credits: This episode’s music is Boomcubism by Brian Eno. The conversation was recorded at Ms. Fleener’s home on a pair of Blue enCORE 200 microphones

. Processing was done in Audacity and Garage Band. Photos of Ms. Fleener by me.