It’s time for our year-end Virtual Memories Show tradition: The Guest List! I reached out to 2020’s pod-guests and asked them about the favorite book(s) they read in the past year, as well as the books or authors they’re hoping to read in 2021! Thirty guests responded with a a fantastic array of books. (I participated, too, in my rambling way!) The Virtual Memories Show offers up a huge list of books that you’re going to want to read in the new year! Give it a listen, and get ready to update your wish lists!

This year’s Guest List episode features selections from 30 of our 2020 guests! So go give it a listen, and then visit our special Guest List page where you can find links to the books and the guests who responded. This year, we also have a Bookshop.org page with a lot of the selections!

Credits: This episode’s music is Fella by Hal Mayforth, used with permission from the artist. The episode was recorded at stately Virtual Memories Manor on a Heil PR-40 Dynamic Studio Recording Microphone

“A dairy restaurant feels to me like an urban, walled Garden of Eden, but it’s in this world, so it gets trapped in the doings of this world.”

The great cartoonist Ben Katchor rejoins the show to talk about his brand-new book, The Dairy Restaurant

(Schocken), a 500-page illustrated history of, um, dairy restaurants! We get into what drew him to the milekhdike personality, the remnants of Eastern European Jewish culture that call to him, why this book had to be prose-with-pictures rather than comics, the decades of research and interviews he conducted, and why these restaurants came to represent the history of how Jews moved away from their parents’ professions. We also discuss just what went wrong with the world, why his favorite books are old Chicago Yellow Pages directories, why just studying Jewish history can constitute a sort of Judaism, his fascination with interwar Warsaw, his plea for a controlled economy, and why The Dairy Restaurant had to begin in the Garden of Eden. Give it a listen (and check out our past conversations from 2013 and 2016)! And go buy The Dairy Restaurant

“Text is about time, and pictures are about space.”

‘I miss the restaurants I never went to.”

“I think everybody for a few moments should think about everything they know, and say, ‘What do I know about it and how does it impinge on my life?'”

Ben Katchor is the author of, among other books, Julius Knipl, Real Estate Photographer

; Hand-Drying in America: And Other Stories

; and The Jew of New York

. He was the first cartoonist to receive a MacArthur Fellowship. He teaches at Parsons/The New School in New York City. His new book is The Dairy Restaurant

Credits: This episode’s music is Fella by Hal Mayforth, used with permission from the artist. The conversation was recorded at Parsons on a pair of Blue enCORE 200 Microphones

. Photos of Ben Katchor by me. It’s on my instagram.

“How can you keep experimenting within your own work? When they say people reinvent themselves, they just mean they put on new clothes or something.”

Ben Katchor rejoins the show to talk about the 25th anniversary edition of Cheap Novelties: The Pleasures of Urban Decay

(Drawn & Quarterly)! We talk about those aforementioned pleasures, the boredom of the modern flaneur, his evolution from genre fandom to “literary comics” (my awful term, not his), the danger in comics becoming over-academic, the challenges of writing a world history, and more! Give it a listen! And go buy Cheap Novelties

We also get into the tedium of the latest iteration of New York City, the experience of capitalism’s end-game, why his comics are a product of a unique moment, his discovery of Undergrounds, the challenges of making anything new, how he found a readership that isn’t interested in comics, and more! Now go listen to the show!

“All these people who weren’t born or were babies when Cheap Novelties came out, now they’re going to look at it and say, ‘What does this mean? How does this even relate to us?'”

Ben Katchor lives in New York, where he is an Associate Professor at Parsons School of Design—The New School. As director of Parsons’ Illustration program, he runs The New York Comics & Picture-story Symposium, a weekly lecture series for the study of text-image work. He has been the recipient of both a Guggenheim Fellowship and a MacArthur Fellowship.

Along with his long-running comic-strip work — Julius Knipl, Real-Estate Photographer, The Cardboard Valise, Hotel & Farm, The Jew of New York, and a monthly strip for Metropolis magazine—Katchor has also collaborated with musician Mark Mulcahy on a number of works for musical theatre. These works include The Rosenbach Company (a tragi-comedy about the life and times of Abe Rosenbach, the preeminent rare-book dealer of the 20th century); The Slug Bearers of Kayrol Island, or, The Friends of Dr. Rushower, an absurdist romance about the chemical emissions and addictive soft-drinks of a ruined tropical factory-island; A Checkroom Romance, about the culture and architecture of coat-checkrooms; and Up From the Stacks, about a page working the stacks of the New York Public Library in 1975. Katchor is the only cartoonist to have won an Obie for Best New American Work, for his libretto and drawings for The Carbon Copy Building, a collaboration with Bang on a Can. His TED Talk is titled Comics of Bygone New York. He is on Twitter at benkatchor.

His books include the 25th anniversary edition of Cheap Novelties: The Pleasures of Urban Decay

, Hand-Drying in America: And Other Stories

, and The Jew of New York

Credits: This episode’s music is Nothing’s Gonna Bring Me Down by David Baerwald, used with permission of the artist. The conversation was recorded in the garden at the rear of the Columbus Metropolitan Library on a pair of Blue enCORE 200 Microphones

. Photo of Mr. Katchor at his drawing desk by Keetja Allard, photo from his Twitter avatar by ???. 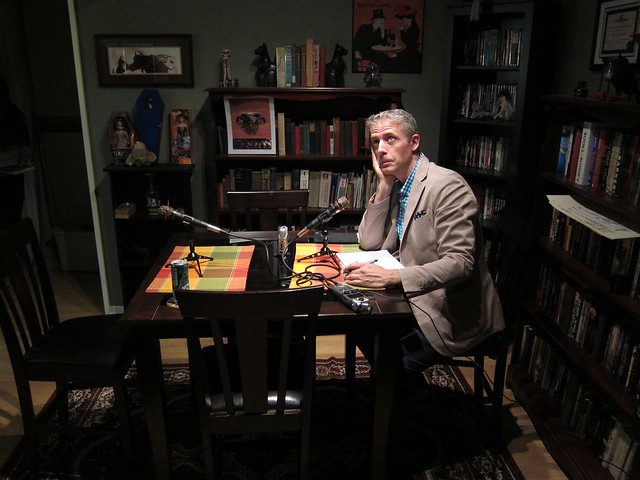