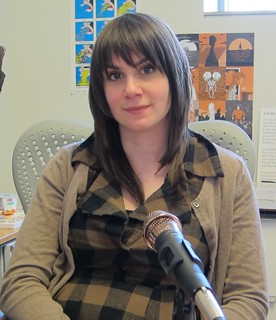 Caitiln McGurk, fresh off of curating her first exhibition at Ohio State’s Billy Ireland Cartoon Library & Museum, The Irresistible Force Meets the Immovable Object: A Richard Thompson Retrospective, joins us to talk about how she got into the rather narrow field of comics librarian, the appeal of Columbus, OH, her dream-exhibition, how the Stations of the Cross got her started on comics, and what it was like to meet Bill Watterson! Give it a listen!

“Because of his whole mystique, people assume Bill Watterson’s a real jerk or so socially awkward that that’s why he doesn’t want to talk to people. But he just wants to have his own life and not be bombarded by fans all the time.”

We also talk about her theory on why Ohio has spawned more cartoonists than any other state in the union, how she worked with the cartoonist Richard Thompson to put together his retrospective, why Dan Clowes makes That Face in every photo, why she loves the lost New Yorker cartoonist Barbara Shermund, and more!

Caitlin McGurk is the the Engagement Coordinator at the Ohio State University’s Billy Ireland Cartoon Library & Museum. She previously served as Head Librarian at the Center for Cartoon Studies in White River Junction, VT. She’s also an intermittent zinester and cartoonist.

Credits: This episode’s music is Sweet Librarian by Railroad Jerk. The conversation was recorded at Daniel Levine’s childhood home on a pair of Blue enCORE 200 microphones

, feeding into a Zoom H4n recorder

. The intro and outro were recorded on Blue Yeti USB Microphone

. Processing was done in Audacity and Garage Band. Photo of Ms. McGurk by me.